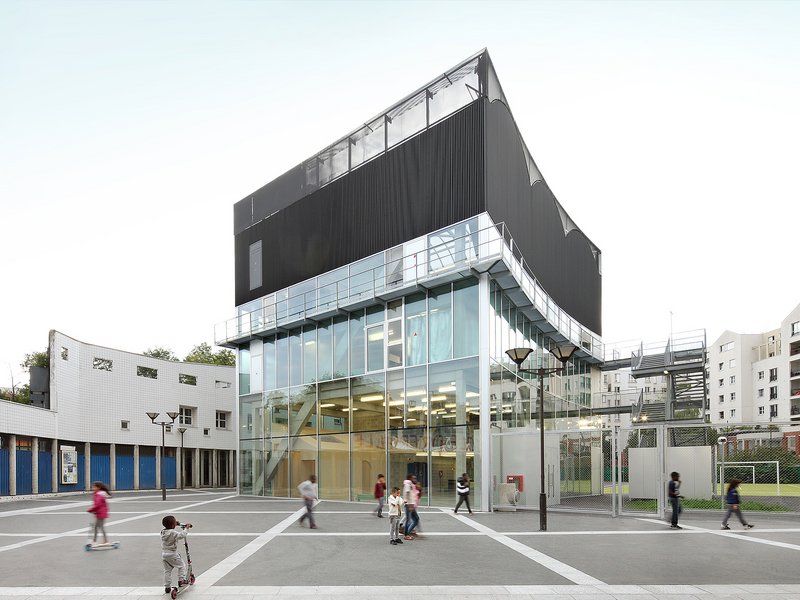 With its compact form, the project becomes a landmark in this otherwise dense neighbourhood. It economises the ground area, which is a real resource for the site, and is developed vertically, while respecting the surrounding buildings. The transparency and porosity of the centre’s urban hall makes it possible to invite, greet and link populations and uses. Along its four façades, the project offers a large range of materials, more or less transparent, adapted to each activity.The building’s form is a direct result of its programmes, but it doesn’t freeze them into place. Independent from the curtain wall, its concrete structure carries a series of free floors, distributed by a core. With generosity as a common denominator of all the spaces, the project makes it possible to reinterpret and refurbish according to the evolution of uses and needs. The project aggregates in its compact volume a large diversity of materials, functions, spaces, uses and relations to the outside. It is a single volume with slightly curved faces that expresses the superposition of distinct functions in elevation. Protected by the jewel-like shape of its setting, the project becomes a new polarity: it attracts and gathers urban dynamics, it sparkles and reflects, it inhabits and articulates a revealed public space, and it gives it back to its neighbourhood.