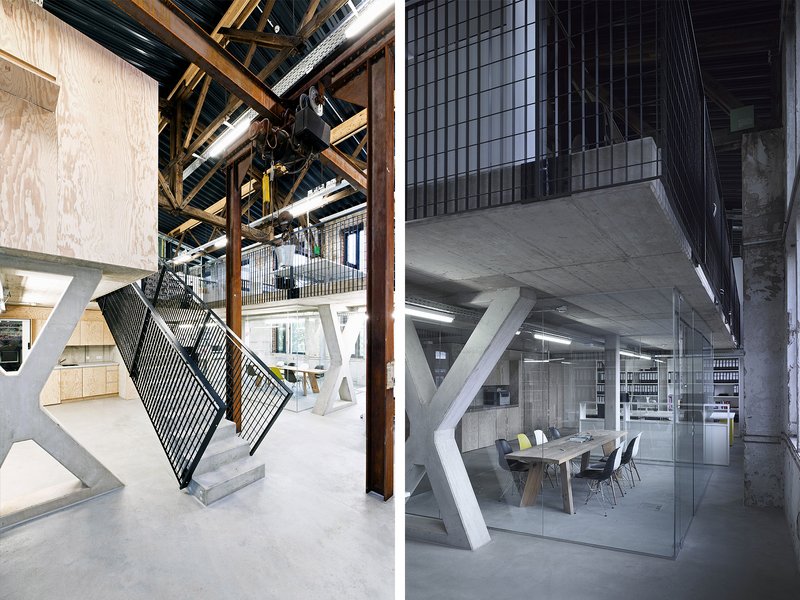 Conversion of a locomotive shed into commercial and office units

Despite its division into six units and the insertion of another storey, the locomotive shed retains its industrial character. The height and generosity of the building and its support structure are still tangible inside. New suspended concrete ceilings rest on X-shaped supports and are not connected to the existing walls. The result is a two-storey atrium that keeps the 6.50-metre ceiling height visible – even on the periphery. The crane runway and high window have been preserved. New foundations were not needed: the X-shaped supports convey the additional loads into the old maintenance pits under the tracks, ensuring the structural reinforcement of the installations and building fabric. The pits are also used for the longitudinal distribution of the installations. The new ceilings heat and cool the building through thermal component activation, with warm and cool air being given off both upwards and downwards. The raw materials were chosen to emphasise the industrial character of the locomotive shed. Gaps in the walls caused by the demolition of the extensions on the east façade were closed with Profilit industrial glazing. As there was no basement, the building facilities are housed in a supply tower. New fire stairs were added as an escape route.