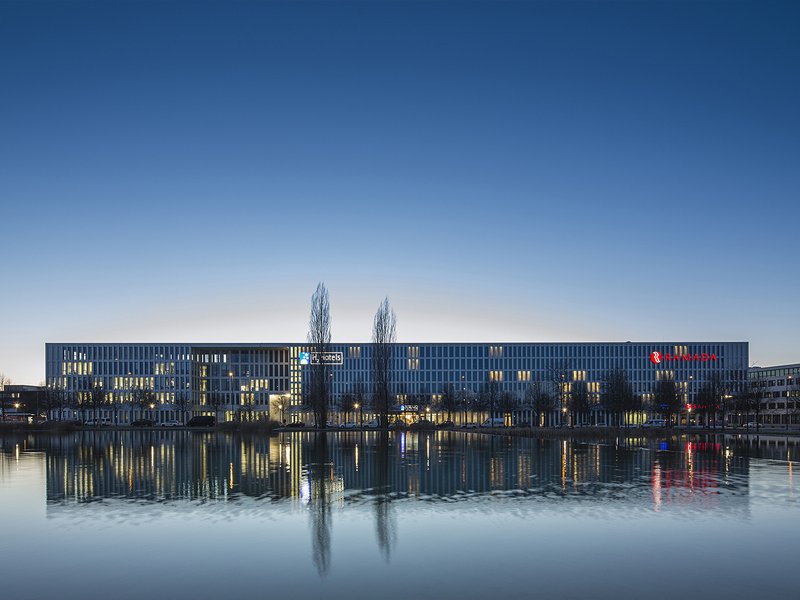 Hotels and Offices on Riemer Lake

The building cuts a clean-lined and concise figure compared to the small-scale, heterogeneous silhouette of the Munich Trade Fair. Thanks to the construction of two hotels offering more than 500 rooms and rental offices for over 500 jobs, cosmopolitan life has returned to the shores of Riemer Lake opposite the old tower of the former airport in Munich-Riem. With its 200 meters in length and 70 meters in width, the block with its three courtyards has the scale of a trade fair hall. The design of the building envelope underscores this grand scale while – unlike the neighbouring buildings – avoiding the impression of being made up of smaller units. The elongated volume is clearly structured through vertical, storey-high windows, which alternate with protruding pilaster strips made of natural-coloured aluminium. The refined articulation of the façade through subtly varying axial widths, the building-high public passage into the interior courtyard and accommodations, as well as the wide overhang that marks the hotel entrance lend the shiny aluminium building a sense of grandeur despite a quite reserved appearance. It recalls both sprawling urban waterfront promenades around the world and also, with its glossy sheen, the silver aircraft at the former Munich-Riem Airport.