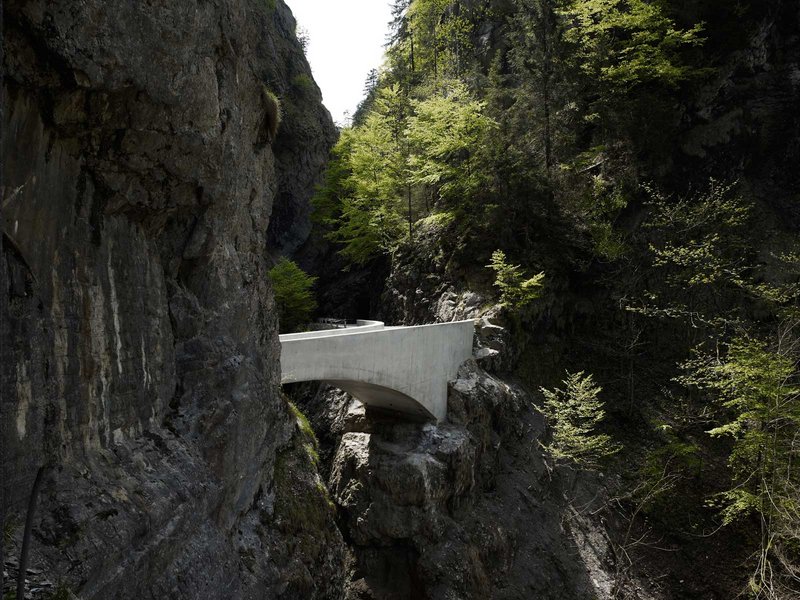 With the second arched bridge on the spectacular mountain road to Ebnit, a small municipality of Dornbirn, the plan for three infrastructure additions has come a step closer to full realisation. Just like the Schanerloch Bridge built several years ago by the architects on the same road, the new Schaufelschlucht Bridge inserts itself matter-of-factly but to great effect in the majestic natural landscape of the gorge. Both follow the same principle: a visualisation cast in concrete of internal and external forces. The deft structural engineering of the arch shape can be felt in its twisting form, tapering as it approaches the valley end; it sets an imposing counterpoint toward the hamlet of Ebnit to the dynamics of the water that over millennia have carved the deep gorge out of the rock. The narrow, dark natural tunnel and the menacing-looking sheer rock faces along the road stage a drama whose pull travellers can hardly resist. Drivers thus feel all the safer traversing the stream, which swells to a roaring torrent after rains, via a passage flanked in sweeping concrete; the solidity and balance of the homogeneous structure makes a stalwart and enduring impression. Genuine sustainability as timeless form.