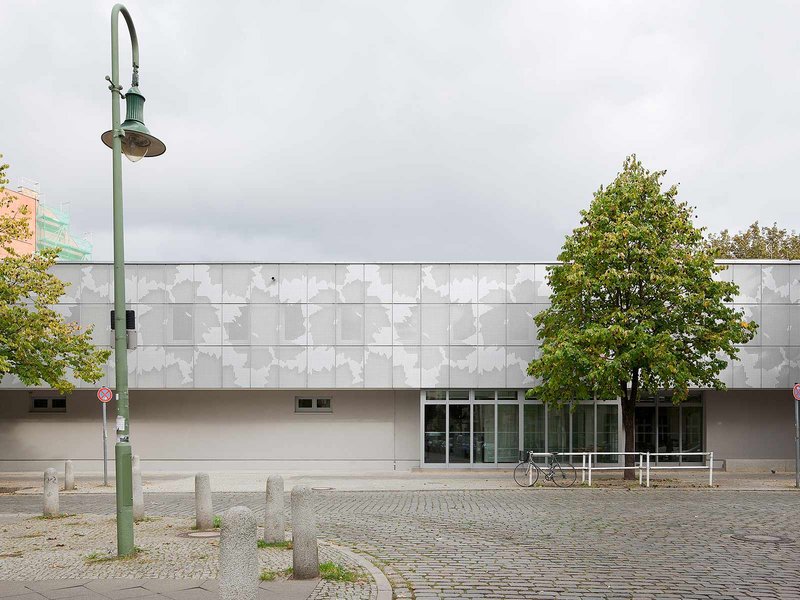 The new double gym building is an independent structure that completes the double primary school ensemble built in 1908 by Ludwig Hoffmann, today a listed monument. Added to the existing sequence of spaces made up by the teachers’ house and school building, which is set perpendicular to the perimeter block development, the new building closes off the ensemble on Malmöer Strasse. This site, which has always been a gap in the Berlin block, is hence given a sense of urban closure for the first time. In order to keep the open spaces as large as possible, the new building is set directly on the plot line toward Malmöer Strasse. Generously dimensioned passages are left open on the ground floor leading into the interior of the block in order to preserve the public character of the lawn areas. The result is a situation known in urban planning jargon as a “pocket park”. On the basis of the axially oriented historical complex, a symmetrical volume has been designed that consists conceptually of two parts. The first is a narrow two-storey wing on Malmöer Strasse that houses all subsidiary functions and is intended in its urban planning logic as a modern version of a pergola between street and park. A perforated sheet metal facade with grape leaf ornament recalls this scenic motif. Inside the block, the second volume, the gym itself, docks onto this wing.