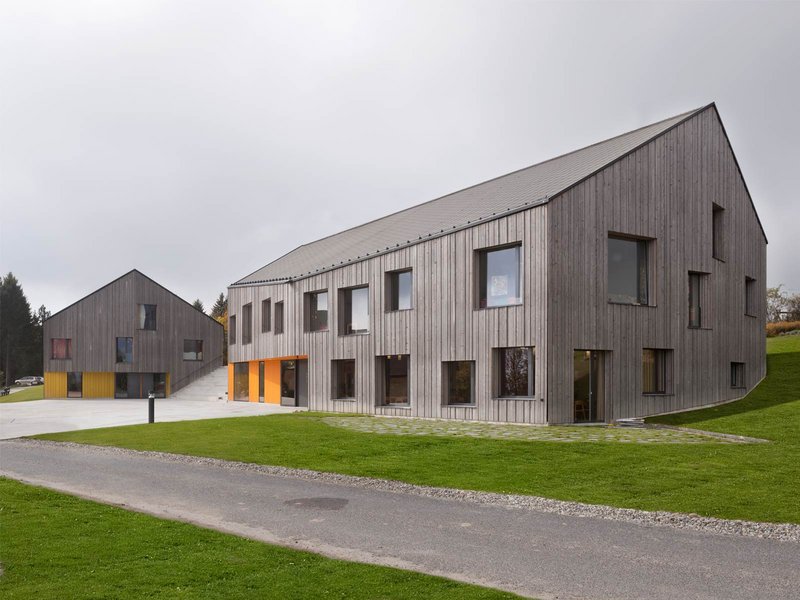 The home for the disabled “La Branche” forms a small village in itself with a view of the Alps. Enjoying a slightly inclined, south-facing situation, the complex has been supplemented by two new buildings and an area that creates a new square, or meeting-place in the heart of the village. A large flight of stairs between the two buildings also serves as a grandstand. The square is accessed via small footpaths that intertwine with the existing network of paths. The rural character of the village is continued with the incorporation of the site’s natural topography. The facetted buildings are integrated as solitaires into the green areas. In line with anthroposophical teachings, the buildings appear in a translated polygonal crystalline form, which is covered with a vertically structured wooden skin. Seemingly randomly positioned windows of different sizes but identical forms animate the appearance. On the lower level of the square, the first building contains a small store and restaurant; the second houses the institution’s administrative offices. The square’s upper level provides access to the internal facilities such as studios and bakery as well as therapy rooms. The simple arrangement of the buildings takes into account the orientation and coordination problems of some of the users. The stairways are situated right next to the respective entrances. The various rooms are accessed via a central corridor along every floor, which is exposed to natural lighting at both ends.