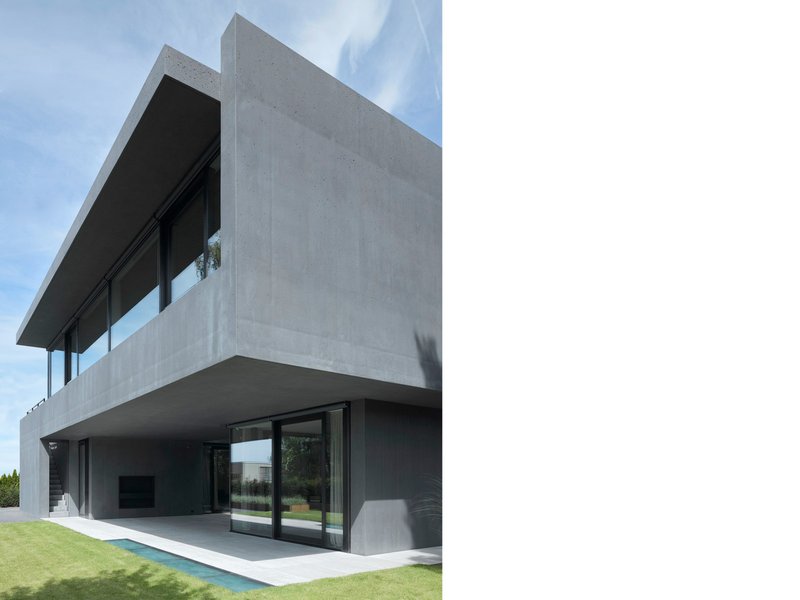 The building presents itself primarily as a spatial-plastic object. Two U-shaped floor plans, one for sleeping and the other for living, have been turned 90 degrees and stacked in such a way that a structure with neither a beginning nor an ending has been created. Stacked disks and plates made of black-pigmented concrete project from the building, creating the envelope of the building, which underlines the initial idea of the two intertwining floors. The window openings are situated where vertical and horizontal areas converge. An outside staircase connects the ground floor to the upstairs terrace and completes a circle through the house. Three concrete walls facing the building and a dense hedge separating the site from the neighbour’s property create a clear border to the outside areas. Three different outdoor areas, or garden rooms, have been created. The main access to the property is via a gravelled courtyard. Next to this is a swimming pool sunken into a wooden floor, then facing south is the main garden. The core of the house is formed by a two-story atrium which evolves from the stacked U-shaped structures. The ground floor opens out to the south towards the garden. The first floor faces west and looks out onto the terrace. An acacia tree has been planted in the courtyard so that it can grow skywards through both levels of the building.