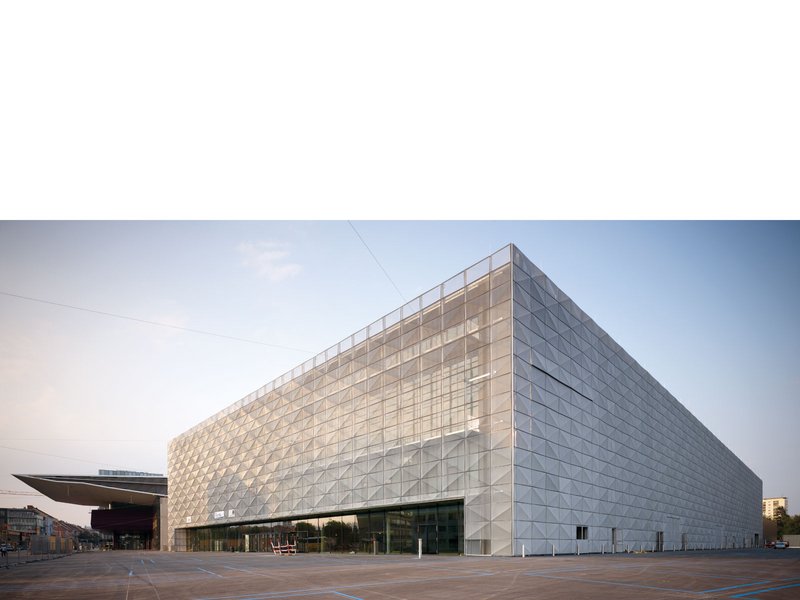 The Graz trade fair grounds lie in a transitional zone between a dense urban residential area and a more relaxed, lower development to the south, interspersed with commercial use. With the construction of the Stadthalle, which was opened in 2002 and whose striking roof extends far into the street space, a symbolic building was created that establishes a sense of identity and takes up an important position in the urban context. In order not to impinge upon its striking independence and its visibility from the south, the new Hall 1 was not placed parallel but swivelled at an acute angle to the Stadthalle. The swivelled placing of the individual buildings results not only in an atmospherically varied urban situation but also makes it possible to create a generously sized approach, loading and open areas on the site. Inside the two-storey hall we encounter a familiar theme: the spatial layering of function structures on a long axis. In this case it is dense function strips allocated to the individual foyers that must be passed before entering the open hall itself. In addition an element emerges that takes up the theme of transition between outside and inside: the hall has a double façade, the space between its two layers accommodates the necessary escape stairs and lifts. While the inner, load-bearing walls are made of reinforced concrete, the outer façades consist of a curtain of expanded metal elements. This gives the hall a matt shimmering, silvery envelope that through its monochrome homogeneity differs clearly from the façade of the Stadthalle and, when required, can be used as a screen.