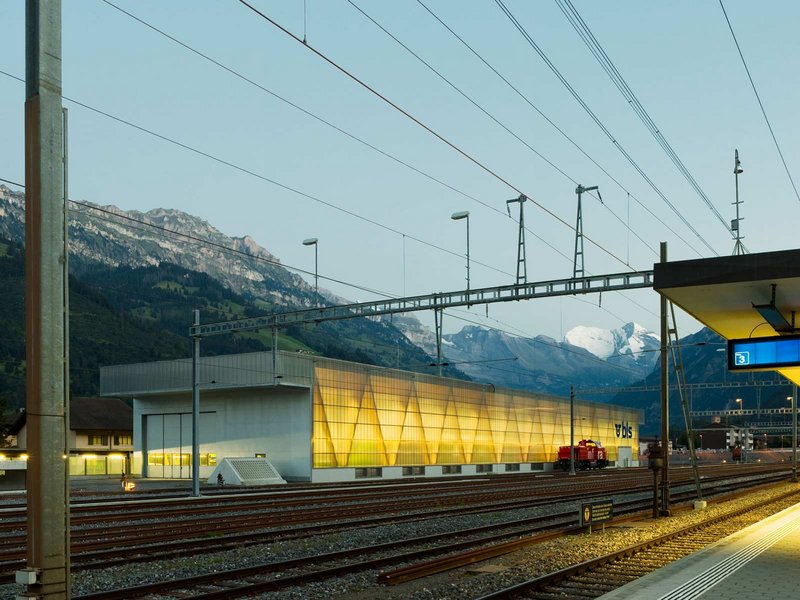 The infrastructure centre, with a maintenance depot and fire station, was constructed to facilitate the handling and upkeep of the new 36km long Lötschberg train tunnel. The complex was initially used as an installation site for tunnel construction. The two buildings – similar in volume but of varying lengths – lie next to the tracks, united by a common base. The projecting roofs on both narrow sides emphasise the linearity. Despite their size, both work floors blend in well with the surroundings, in part due to the green, multi-wall polycarbonate sheets forming an outer skin layer. During the day, the carrying structure is barely discernible, but at night it shines through the translucent facade. Reminding of alpine infrastructural constructions two-pinned frames stabilise the hall along the shorter axis and frame struts resist longitudinal loads. In ecological regard the centre is trend setting: apart from the use of renewable materials for the construction, the heating energy is withdrawn from the hot water generated in the train tunnel. The combination of traditional and innovative elements accomplishes “the Site Appeal” corresponding with the self-image of the railway company: Reliability and regional traditions on the one hand, credibility and innovation on the other. The timber construction, that remains visible behind the outer skin as well as the roof greening display the ecological intent, which complies with the buildings and the entire railway company.