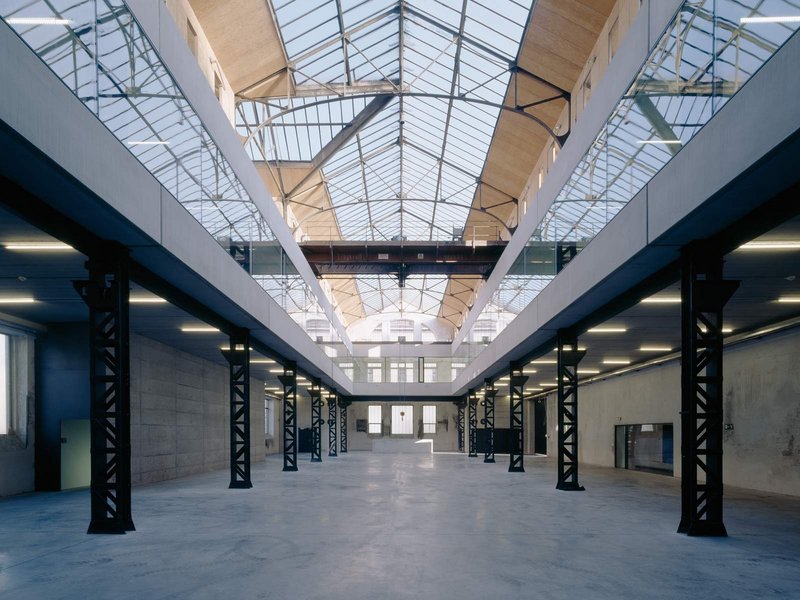 The Task > Conversion and redevelopment of the 1904 listed industrial hall for Balloonart Veranstaltungs GmbH. Creating functional space to also represent the identity of the young company. Balloonart, a “creative industry” company, plans to use the hall as a contemporary platform for inter-disciplinary development and productive-communicative exchanges. > The Concept > The spatial idea is to preserve the filigree glass roof spanning the basilica-like interior of the hall by means of a room-in-room concept. A new, circular gallery and all the rooms within it are self-contained, climatically separate, independent structures made from reinforced concrete. Old remains old. Traces of wear and layers of paint in the historical building will, if possible, be preserved. All new structural elements will be clearly recognizable as such. The core areas, which Balloonart will be using as offices and production floors, will be complemented with flexible and temporary zones used for events and workshops. All processes are thus part of the whole and foster a strong feeling of togetherness and identification among the employees and customers as well as the users of the temporary spaces. In collaboration with the Technical University Vienna the company has recently developed an “inflatable bridge” for the emergency aid services. Production floors will be housed in the hall. Up to 400 Europe palettes with goods can be stored in a newly built basement underneath the central nave. The bigger part of the hall’s area will be used as a manipulation area for day-to-day production on the one hand and on the other, as a special space for events.