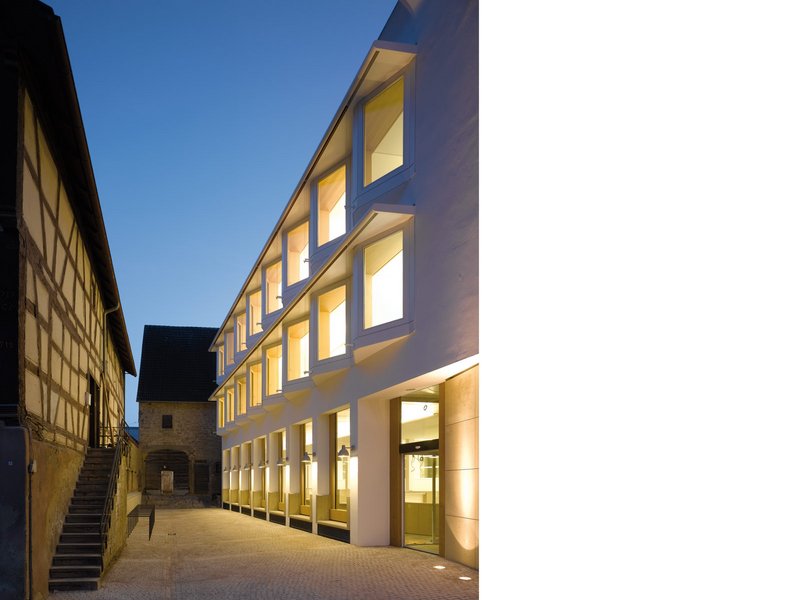 The city hall in Eppingen was designed in 1824 by Karl August Schwarz, a pupil of Friedrich Weinbrenner. In the early 1970ies the original building in the town centre had become too small. As a result, a large part of the administration was relocated to a former agricultural college on the periphery, leaving only the Services to the Public Office in the town centre. Despite the prime location of the city hall, many years passed in which it was not perceived as a public building. A principle debate about the future location of the administration in 2000 led, however, to some rethinking. Although the location on the cities edge would have offered the opportunity to consolidate all organs of the administration, the city opted for a return to the historical city hall in the centre. To enable this move, the old hall had to be renovated and extended. The extension is adjacent to the historical city hall, joined to the original building by small passageways. The Services to the Public Office is now situated in the plastered, white extension. The jagged, 3-dimensional facade is quite distinctive, the swelling bay windows optically enlarge the interior and guide our attention toward the market-place. The restored facade of the original building features a return to the original colour-scheme and the cities historical Coat of Arms. A few well-implemented measures led the old building and the new extension into an exciting dialogue, making the city hall once again the eye-catcher of the market-place.