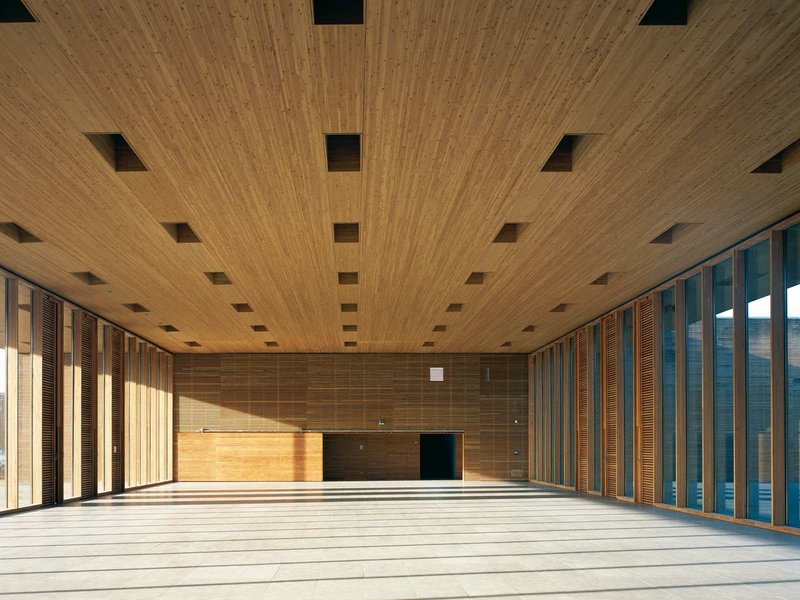 The site and the building could not be more comlementary. The architects have placed the two-storey school building like a giant piece of furniture in the middle of a green field. The distance from the neighbours emphasises this effect. Accordingly, one crosses the 100m from the school gates full of curiosity as to how this hall-like low building can function as a school. At first glance classroom windows and an entrance are not recognisable. Instead the fassade is dominated by a wide, deepincision, with full-height glazing. There is a conspicuous view into the 1,20m high exposed roof structure, which the architects describe as the “gigabox”. The line of sight, from the forecourt, through the hall and into a courtyard, quickly makes it clear that this is not, as might at first be thought, a compact building, but rather a u-shaped structure, with the glazed hall forming a representative termination to the “U”. Twenty classrooms, ten laboratories and the school offices are clearly arranged in this simple ground plan. The roomsin which the pupils and teachers spend the most timeare oriented to the south-west or south-east, with a view over the landscape. Workshops, laboratories ancillary rooms and the stairs form the basis of the double sided u-form. The image of the building as furniture gains an extra meaning from the room-high shutters of high-quality Douglas-pine which run around three sides. These double-leaf shutters open and close like secret compartments. They are manually operated as neede, and locked in place with strong storm hooks. In a closed position, as is mostly the case, these shutters give a suprising feeling of depth to the fassades of the building, which are otherwise structured by only the rows of identical windows.