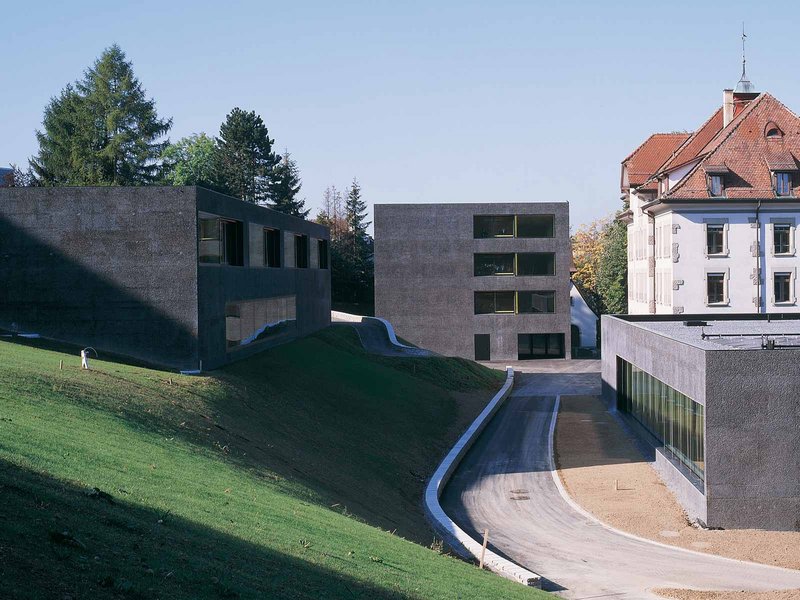 The old school house “Villa Thérèse”, an old turn of the century boarding school, is located within a generous park between the historic city center of Fribourg and a quarter comprising apartment buildings from the 1960s and 1970s. It was to be expanded with the addition of classrooms, kindergarten classes and one double gymnasium. The three individual volumes that were newly integrated into the park were grouped around the existing schoolhouse. Together with the Villa Thérèse, they form a campus through the creation of distinctive outdoor spaces. Spatial relationships and condensations were achieved, while an overall expression, which can also be found in the city, was accomplished. The design of the volumes is oriented towards two poles: nature and abstraction. The dark tinted concrete on the facades, etched to allow the edgy gravel to show through, gives the appearance of natural stone and helps to integrate the volumes into the park landscape. Contrary to the coarse outer appearance, the interior of the three buildings is characterized by smooth surfaces and the color scheme. With respect to their interior structure, the three new buildings react to their relationship with the park space and the other buildings. The primary schoolhouse consists of a sequence of spaces with differing orientations. In the case of the kindergarten, the access and recess hall, which is located parallel to the slope, is overlapped by the arrangement of the classrooms, which cross the hall‘s axis. The classrooms are oriented towards two directions. Half of the gymnasium is below grade, built into the slope. Above it, the glazing along its entire width allows a view into the gymnasium from the access path and, through the glazing on the other side, into the hilly landscape.