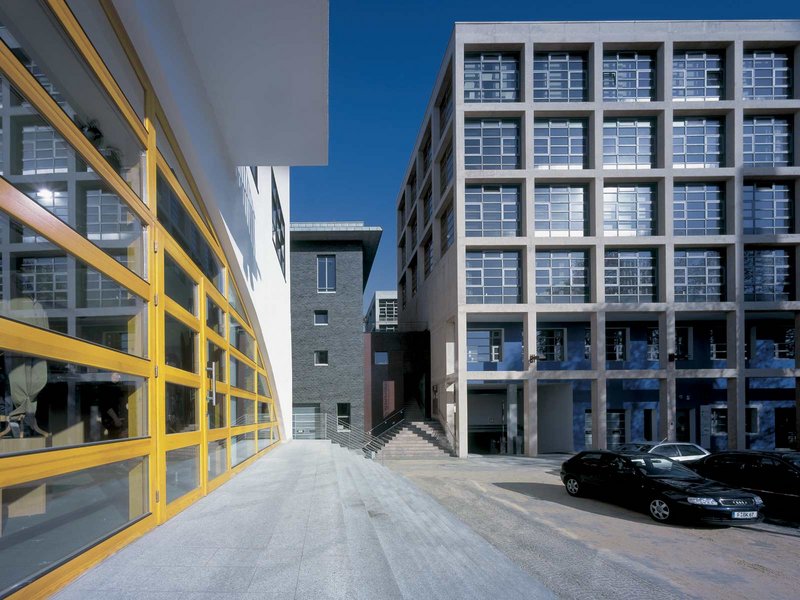 The conversion and revitalisation of old industrial premises is a construction task which is increasingly important in the trasition from an industrial society to a service society. Michael A. Landes, converted the site of the Union brewery in Frankfurt into a new urban district by cautiously supplementing the existing substance with new buildings. This ensemble situated in Hanauer Landstrasse, Frankfurt’s centre for creative people of all kinds, is convincing in the power of its architectural language and in its urban quality. A fine balance of access space and open spaces makes it into a city within the city which is open for a wide range of uses. “What the architect created with his sophisticated outdoor stairs, his dramatic staircase buildings which are sometimes reminiscent of Piranesi and the subtle combinations of lofts, galleries and workshops of breathtakingly high and comfortingly intimate rooms is an all-embracing and discrete succession of stage settings for work and relaxation. His consistent use of solid and often plain materials, although they are always attractive in texture and appearance, is the device he uses to bring life to this stage setting, to make his buildings into what he calls ‘city architecture’ which ‘represents an invitation to life and work’. The success of this invitations is now confirmed by the cafés, restaurants, bars and night clubs which are full around the clock, the lively literary scene in the Romanfabrik, the events held in the Union hall, the prospering shops, the agencies and ateliers in the lofts.” quotation from the book Michael A. Landes Architekt Union Frankfurt/Main > Junius-Verlag from Dieter Bartetzko (editor)