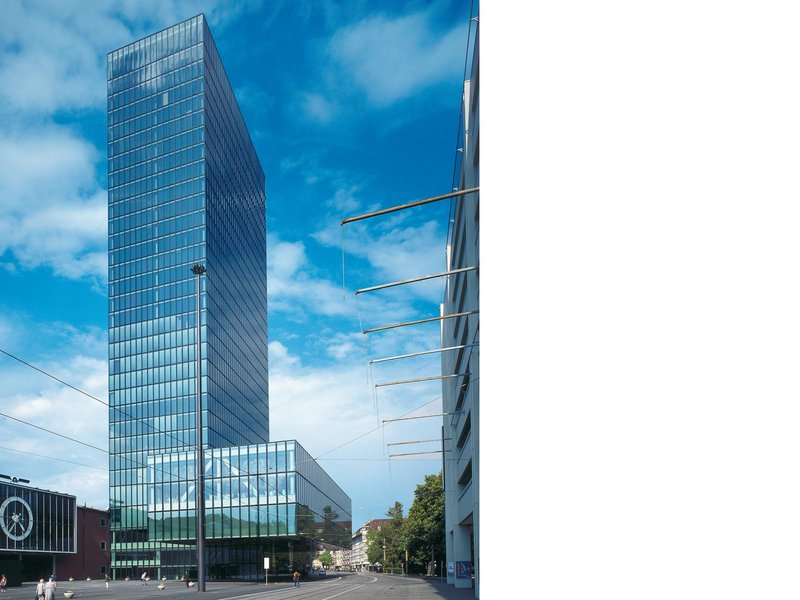 Messe Basel has grown in its location and established itself as an integral part of the urban landscape. However, the ensemble is architecturally unremarkable and lacks urban references. The goal of the concept „Messe Basel plus“ was to balance out the deficits and create a new landmark. The design aims at integrating the exhibition center into the cityscape. It satisfies the urban and architectural demands and the requirements of various programs in a single building. The starting point is a highrise building. The tower was complemented with a base resembling a platform, which is raised and seems to float above the ground. The cantilevered element of the construction moves into the field of vision on the axis from the central bridge across the Rhine River to the Badischer Bahnhof and lends perspective to the space. This part of the building creates an arrival area and forms the transition from the exhibition center square to the Rosental Park. The tower soars into the sky above the city and creates a bold, new landmark. The two building elements have an urban expression both from a distance and closeup. The service areas of Messe Basel, public restaurants and conference halls are located in the base. Ten floors of the tower are for hotel rooms, and three floors are for the trade fair administration. A bar on the 33rd floor offers an impressive view of the city below. The steel framework of the structure is visible from the outside and allows for the greatest possible support eliminating the need for interior columns. In addition, they reduce the weight of the cantilever. A homogeneous curtain wall of the façade achieves an appearance of plasticity. The various functions within the building and their structures are visible behind the transparent façade. On a second level of perception, the building‘s spatial depth comes into focus.